A history professor in Memphis Tennessee discovers that the parking lot of the church he attends used to be a slave yard belonging to a Confederate army general.

A history professor in Memphis Tennessee discovers that the parking lot of the church he attends used to be a slave yard belonging to a Confederate army general.

Rhodes College professor, Dr. Huebner’s research reveals there used to be a slave yard in the parking lot of the church he attends, situated in the middle of downtown Memphis. Not just any slave yard, but one belonging to Nathan Bedford Forrest, a famed Confederate army general.

What irks Dr. Huebner is the existing marker on the edge of the property doesn’t mention the fact that humans had been sold there by one of the South’s favorite sons for immense profit and personal gain.

“The Yard” is a story of courage to face the truth. A will for change. And the need to openly discuss a dark past to move on to a brighter future.

Supported by contemporaries and Memphis historians, Dr. Huebner physically rectifies the past when he erects a marker that states the facts about the site on April 4th, 2018 (the 50th Anniversary of Martin Luther King Jr’s assassination).

Dr. Huebner also pays tribute to over 70 known slaves sold at “The Yard” over a century and a half ago.

Timothy S. Huebner is the Sternberg Professor of History at Rhodes College.  A specialist in the history of the nineteenth-century United States, he is the author of Liberty and Union:  The Civil War Era and American Constitutionalism (2016), The Taney Court: Justices, Rulings, and Legacy (2003), and The Southern Judicial Tradition: State Judges and Sectional Distinctiveness, 1790-1890 (1999).  He is co-editor (with the late Kermit L. Hall) of Major Problems in American Constitutional History, second edition (2010).  In addition, he has published numerous articles in scholarly journals, and his essays, reviews, and op-ed pieces have appeared in the Memphis Commercial Appeal, the Nashville Tennessean, the Wall Street Journal’s Marketwatch website, The Weekly Standard, SCOTUSBlog, and the New York Times.

Prof. Huebner serves as co-editor (with Paul Finkelman) of Southern Legal Studies, a book series published by the University of Georgia Press, and since 2010 he has served (under editor Melvin Urofsky) as associate editor of the Journal of Supreme Court History, published three times a year by the Supreme Court Historical Society.

A member of the faculty at Rhodes College since 1995, Prof. Huebner teaches courses on the History of the American South, U.S. Constitutional History, and the Civil War and Reconstruction era.   He founded and directed the Rhodes Institute for Regional Studies, a nationally acclaimed interdisciplinary undergraduate research program, and later served as chair of the Department of History for six years.  In 2004, Prof. Huebner received the Clarence Day Award for Outstanding Teaching, given annually to a member of the Rhodes faculty.  That same year, the Carnegie Foundation for the Advancement of Teaching and the Council for the Advancement and Support of Education named him the Tennessee Professor of the Year. 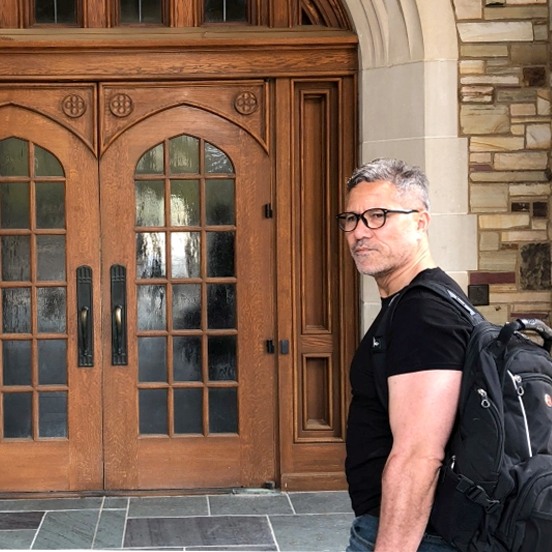 John Reyer Afamasaga is a storyteller. His first documentary The Yard (2018) was nominated for the John E. O’Connor Film Award of the American Historical Association. When he’s not behind the camera, he’s at the keyboard as a fiction author penning a different perspective of what he uncovers, one that gives him scope to elaborate without boundaries. He also works closely with his wife Michelle M. Pillow who is a New York Times and USA Today bestselling author. He is responsible for the video marketing of her books. John keeps healthy by working out regularly, which he also attributes for his endless energy and creativity.

Cast and Crew of The Yard